all images are clickable 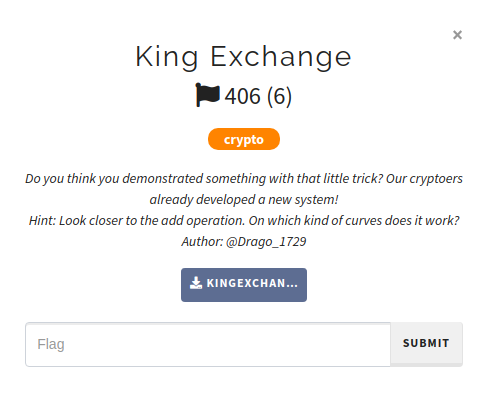 The given zip-archive contains two files: a python script and its output.

The encryption algorithm is straightforward: it uses AES-ECB with unknown key and prints out a ciphertext.

We need to recover the key, let’s find out how it was generated.

The challenge performs some kind of Diffie-Hellman key exchange with unknown modulus p (we will back to this later). It means that server generates two secret values a and b, multiplies the generator g by these secret values and prints out resulting A = g * a and B = g * b.

We need to obtain a or b, that means we need to solve a well-known discrete logarithm problem.

The main mystery there is which group we’re working in? Let’s take a closer look on functions multiply and add_points.

This P + Q operation is not so obvious (at least at the first sight), but it reminded me the addition law on Edwards elliptic curves:

It brought me to a solution. The d parameter in denominator is a curve parameter which has the form:

That’s right! With d = 0 it becomes just a circle. That case is also mentioned in Wikipedia article:

Ok, now we’ve got the curve we’re working on. A, B and g are points on the circle.

Remember unknown modulus p? Now we are able to recover it. From circle equation we get:

Move 1 to the left side and rewrite the module condition:

Now p is the common divisor (probably, greatest) of the left sides of the equation. Using Euclidean algorithm we could recover it.

The given p is prime, so we’re lucky, it is our modulus! But we still need to solve discrete logarithm.

After some searching I’ve found a question on StackExchange, where the author is asking why we use elliptic curves instead of other curves (such a circle) in cryptography. The answer gives a link to paper with a proof that the discrete logarithm in the circle group is no stronger than the discrete logarithm over the underlying field.

So I’ve tried to rewrite it in sage and run standart discrete_log function.

We’re lucky again, after some seconds it was printed the secret b! In the general case we would need to check smoothness of the field order and other parameters, but here it’s not required — sage did its job.

Now we easily can calculate shared key and decrypt the flag: