all images are clickable

The given tar-archive contains two files:

Let’s look on these files.

First we’ll consider that Cabal package file may be useful later, when we would run the Haskell application locally. So we will start analyzing the Haskell code. Since it’s a bit unusual to see Haskell code in the crypto challenge, the reading itself isn’t too hard. After spending a few minutes I could slightly understand what’s going on.

Okay, so we’re working with some Elliptic curve. The analysis of encrypt/decrypt functions (or just reading the challenge’s name) helps us to guess the encryption scheme — it’s ElGamal. So, here is ElGamal scheme over the Elliptic curve, right? Yea, looks secure, because discrete logarithm problem is still hard on Elliptic curves (this probem is also known as ECDLP).

The curve is secp256k1, it’s a well-known Elliptic curve, and it provides enough security for this challenge. This curve is even used by Bitcoin. Since we’re working over that curve, let’s start our exploit with curve parameters. We denote the curve E and its base point G:

I’ll describe a bit what the server does:

So, now we completely understand what the server does. Let’s try to find some vulnerabilities.

There are no obvious vulnerabilities, because secp256k1 is secure itself, and the code ensures all required security checks. Since we need to recover x, I started to analyze decrypt function, because it was the only one place in the whole code where x is used. Here is decrypt pseudocode:

Luckily, we control the point c1, which are multiplied by x! Looks like a clue. Since we know c1, c2 and resulting m, we can reverse all transformations and retrieve s. But discrete logarithm is still hard.

First I started to think about Small subgroup attack, but quickly realized that the curve base point G has prime order (quite expected). Suddenly my teammate @CerebralObserver pointed out that some security check does not hold! More precisely, this code just does nothing (I don’t know Haskell, so I don’t understand why, but it’s a fact). These errors are never thrown:

This attack exploits the fact that we are able to send fake point to the server, and it will perform all Elliptic curve operations with our fake point. To understand the attack, let’s look at the Elliptic curve addition law. If we want to calculate R = P + Q, here are two main cases:

As you see, the addition law uses at most a coefficient from the Elliptic curve equation, and b is never used! So without the correct curve check we could send a fake point from another Elliptic curve (with another b coefficient)! Thats why the attack called Invalid curve — we send a fake point from Invalid (less secure) curve, but the secret remains the same. Using known vulnerabilities in our Invalid curve we could “easily” find the discrete logarithm.

How Invalid curve attack could be exploitable in our case? Let’s look at the secp256k1 equation again:

So, we can send a point from a cusp: 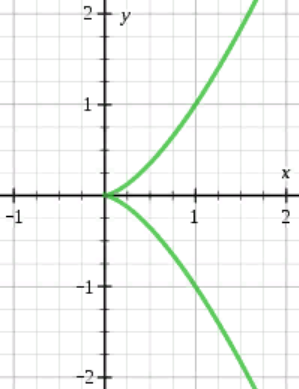 Cusp has well-known property, which becomes useful in our case. One can construct a map from the cusp to an additive group. And the discrete logarithm in an additive group is just division: 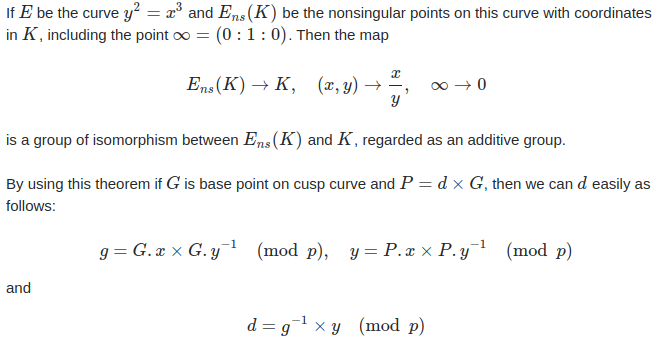 So our plan is:

Many thanks to the author, the challenge is great!